The Ultimate How-To Guide for Speaking up at Work

Do you feel reluctance about speaking up at work? If you are, you’re not alone. As a corporate psychologist and  executive coach, I’ve worked with a lot of people who refrain from expressing their ideas in the office. In most cases, they aren’t staying quiet because they don’t have anything to say – instead, they ‘re purposely choosing to censor themselves.

Why are people reluctant to speak up?

In my experience, I’ve found that people are reluctant to speak up for a number of reasons. In some cases, it’s based on organizational concerns. For example, if you work in a toxic workplace, you may have seen other people being punished for speaking up. Consequently, you choose to stay quiet because you know it may not be safe to say what you really think.

In other cases,  you may think that it simply isn’t your role to communicate your thoughts. This dynamic often plays out when there are people of different levels in the room. Frequently, the more  junior ones will be reticent to speak up because they don’t think they’re supposed to. At other times, they may want to say something, but are concerned that it may be at odds with their senior colleague’s views.

In some instances, aspects of your personality may prevent you from speaking up at work. For example, if you lack confidence or feel like an “imposter,” you may question the value of your ideas. As a result, you might keep your thoughts to yourself because you don’t think they’re worthy of being voiced. Or, if you are introverted, shy, or uncomfortable being in the spotlight, you may choose to stay quiet so as not to call attention to yourself.

A fear of confrontation can also cause you to be reluctant to share your ideas. For example, if you’re afraid of conflict and don’t want to challenge others’ perspectives, you may stay quiet to avoid having someone disagree with you. Or, you might refrain from speaking up at work because you’re concerned that if you express a difference of opinion, you will hurt someone else’s feelings.

At the core of all of these reasons is a desire to remain safe. This is a perfectly reasonable desire; however, in the above scenarios, many of the perceived threats are based on your own insecurities. While this might feel more comfortable, do you really want to allow your self-doubt to prevent your from fulfilling your potential?

Why should you make your voice heard at work?

Given that there is a sense of safety in staying quiet, why would you want to speak up? After all, doesn’t sharing your views open you up to potential conflict or embarrassment? While that is a possibility, I’ve found that people often overestimate the risk. In my experience, if you’re in a reasonably supportive culture, there are many more benefits than disadvantages to speaking up at work.

Think of it – you have a unique perspective. No one else in your organization (or the world, for that matter) has the exact same outlook and perspectives as you do. Therefore, when you share your thoughts, they can potentially help the organization and spark other ideas in the people around you. Research suggests that cognitively diverse teams solve problems more quickly. However, if you’re not sharing your opinions, your team isn’t able to benefit from them.

Speaking up can also help your career. After all, you were hired for the contribution that others thought that you could make. This means that when you speak up, you can maximize your impact on the organization. If, however, you choose to keep your opinions to yourself, there’s a good chance that your value could be overlooked (or at least, underestimated). I’ve observed this many times, when I’ve worked with brilliant people, who didn’t speak up. Instead of being seen as the thought leaders they could be, they were perceived as mediocre employees without the potential to advance.

Finally, for many people, speaking up at work simply feels better on an emotional level, than stifling themselves all the time. (I can personally attest to this, as noted in this article). Instead of feeling frustrated, you could feel empowered by asserting yourself.  In addition, it may help you to feel more connected to your work, because you could have greater influence on your environment.

So, should you just take off Your filter and say whatever you want?

Let’s face it – while it would be nice to think that speaking up at all times is the right thing to do, sometimes, it simply may not be appropriate. Therefore, the issue of whether expressing yourself will help or hurt you depends largely on what you are speaking up about, and when and how you do it.

With respect to run-of-the-mill topics, speaking up can often contribute to being seen as someone who cares about the organization, takes initiative, and has a desire for influence. As noted earlier, if you have a lot of great ideas, but keep them to yourself, others in the organization might undervalue what you can contribute. And, this may cause you to get overlooked for promotions. So, speaking up can be a good way to get noticed.

However, if you’re known for putting your foot in your mouth, or speaking without tact, then you’ll likely want to tread a bit more lightly.  Speaking with consideration and diplomacy is likely to go over a lot better than saying whatever is on your mind, and justifying it by saying “I’m just being honest.” So, if you are someone who is always complaining, pessimistic, negative, or rude, then speaking up all the time will likely hurt you (unless you improve your communication skills).

Finally, if you want to speak up on a very sensitive topic, then it probably makes sense to consult with someone you trust so that you can craft your message appropriately. If it’s a one-on-one conversation you’re preparing yourself for, you might even want to role play different scenarios. You can also  practice mindfulness so that you can take a step back and manage your emotions in the moment, to increase the odds that you’ll convey your ideas in a balanced and constructive way.

Some Tips for Making Your Voice Heard

Want to challenge yourself to speak up more? If you do, here are a few quick tips that will help you to do it effectively.

1. Be Sensitive to Your Audience – If you’re hoping to influence others, make sure to think about what’s important to them. Don’t make the mistake of crafting an argument simply based on what would convince you – take others’ needs, motives, and preferences into account.

2. Use Active Listening Strategies – While it’s beneficial to express your opinion, you’ll likely be more effective if others know that you’re open to their perspectives. Look for points of commonality, express empathy, and communicate to others that you’re considering their thoughts. Doing so will open the door to a more constructive conversation.

3. Speak with Confidence – If you sound uncertain or tentative, even a fabulous idea might be dismissed. Therefore, make sure to practice your delivery so that you can come across as more self-assured. Watch out for filler words, volume, eye contact, and vocal intonation (you might even want to record yourself). If you need some help, try Toastmasters. You’ll get lots of practice, valuable feedback, and support from fellow members.

4. Couch Your Opinion, When Appropriate – Sometimes, depending on the situation, the culture of the organization, and the person(s) with whom you are interacting, you might want to take a more measured approach. For example, if you are in a very hierarchical culture, then saying something like “I wonder if…” might be better received than “You really should…”  when speaking to your boss. On the other hand, some leaders and cultures really value candor, and less of that might be necessary.

5. Remember that You Won’t Always Get Your Way – If you express an idea that isn’t accepted, don’t get discouraged. Great solutions often come as a result of a group of people feeding off others’ ideas and expanding upon them. Give yourself a pat on the back for challenging yourself to speak up, and commit to keep practicing!

Poet Audrey Lorde wrote, “When we speak we are afraid our words will not be heard or welcomed. But when we are silent, we are still afraid. So it is better to speak.” When done with care, speaking up at work can make you feel more empowered, valued, and engaged on the job. 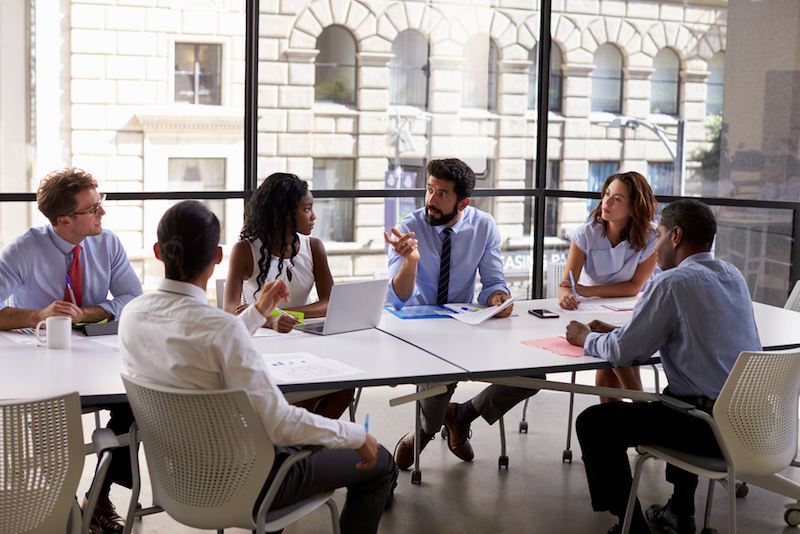 Want to be a High Performer? Develop these 7 Qualities

How to Help Your Employees to Set Motivating Goals