If you’re like most of my friends and clients, you feel like you have a lot to do, but just don’t have enough time to do it all. “If only there were more hours in the day, I might be able to make my dreams a reality,” you lament, wishing that you could magically slow down the clock.

Could You Be the Problem? How familiar does this sound?

You sit down to work on a project, study for an exam, or write the next Oscar-winning screenplay. Fifteen minutes later, you realize that all that you’ve accomplished has been to post a picture of your latte on instagram, send five texts, and take a random quiz that informs you that you should actually be living in Bora Bora.

Research suggests that we are often our own worst enemies when it comes to accomplishing our goals. Although we might think that we’re using our time effectively, in reality, many of us are interrupting ourselves so often that we simply can’t get anything done.

For instance, one study followed adults across 300 hours. The subjects were outfitted with biometric belts to gauge their emotional engagement, along with glasses with cameras embedded in them so the researchers could see how they were spending their time. During the study, it was found that younger adults switched from task to task once every one to two minutes, while older adults switched tasks once every three to four minutes.

In other words, people were switching from task to task anywhere from 17–27 times per hour!

If you work in an office, this research might be exactly what you would expect. After all, I’ve heard many clients complain about how impossible it is to get work done when they’re around other people. Co-workers are always dropping by their desks unannounced. Other people’s emergencies cause them to have to shift priorities on a dime. Bosses continuously add more and more to the demanding workloads that they already have. As a result, it can be really difficult to get into a flow.

Another study, which followed employees at a telecom company, confirmed the idea that people are always getting interrupted. In fact, the data in this study suggested that employees spent only about half of their workdays engaging in behavior related to work. The average length of time that employees spent on any particular task, before switching to something else? A mere three minutes!

However, before you go blaming your co-workers, you might be interested to learn that this same study indicated that almost two-thirds of the work interruptions were initiated by the workers themselves. And, most of these interruptions involved a technological device such as a smartphone and a computer.

To add insult to injury, the study also found that most of those distractions didn’t come as a result of a notification or incoming alert. Instead, it was simply as a result of the workers checking their devices to make sure that they hadn’t missed anything.

In other words, most of the time, the workers had no one to blame for their interruptions but themselves.

Why We’re So Tied to Our Devices

So why are we so tied to our devices?

Part of it comes down to operant conditioning, psychologist B.F. Skinner’sclassic approach to shaping behavior. As has been proven many times over, when you positively reinforce a behavior, you increase the odds that it will happen again in the future.

How does this relate to your devices?

Every time you check your smartphone or scroll through social media, there’s a possibility that you might get positively reinforced. Sometimes, when you look at your phone, there’s absolutely nothing of interest to you. But, other times, there’s a nugget that gives you a rush of excitement — whether it’s a text from your significant other, the latest bit of celebrity gossip, or an email announcing a flash sale at your favorite store.

In addition, the reinforcement schedule that you’re on for your smartphone (the variable ratio schedule, in case you’re interested), tends to produce very rapid responding. It’s also the reinforcement schedule that tends to create the most consistent behavior that is the most resistant to being extinguished (for reference, slot machines operate on a variable ratio schedule). And so, because you’re reinforced every so often when you look at your phone, you’re being set up to continue that checking behavior over and over.

Another reason we’re so prone to distraction?

Technology is everywhere. As a result, we have all sorts of wonderful opportunities to distract and entertain ourselves sitting, quite literally, at our fingertips. And, when something is easily available to us, we’re more likely to use it.

For example, when you’re aiming to eat healthier, what’s one of the first thing you’re instructed to do? Clear your home of junk food. After all, you’ll be lot less likely to eat a chocolate bar if you have to get in your car and drive to the store, as opposed to reaching into your desk drawer to get one.

But what do you do, if the item you’re trying to avoid is simply one click away, and you have to work on your laptop as a function of your job? Is there any way to combat the lure of the potential delights awaiting you on social media and in your inbox?

How to Get Control Although it might seems like the odds are stacked against you, there areseveral things that you can do to increase your productivity.

1. Turn Off Your Alerts

Although we often interrupt ourselves without any sort of external stimulus, research also shows that when our notifications do go off, we tend to be easily distracted. For example, one study showed that on average, people waited less than two minutes to open their email messages. Another study showed that 41% of workers responded to emails immediately, while 71% answered their instant messages immediately.

The bottom line? Because notifications can be too enticing to resist, you’ll need to do your best to eliminate the temptation.

If you’re working on your laptop, take your email accounts offline. Mute the notifications on your smartphone. Turn off your social media alerts. Give yourself fewer potential distractions to ignore, and you’ll be making your life a whole lot easier.

To decrease your attachment to your technological devices, you’ll also need to change your relationship with them by creating some new habits. To do this, start by setting up some rules for yourself to govern how you’ll interact with email, social media, and the internet.

For example, if you typically check your smartphone every five minutes, decide that you’ll only allow yourself to check it every quarter hour. To avoid going down the rabbit hole of switching tasks every time a message arrives, set aside designated periods during the day devoted to responding to emails. Do the same with web-surfing or engaging with social media — schedule those times in advance too.

Then, consider these rules set in stone, without any wiggle-room. Although they might feel challenging to stick to at first, across time, they’ll become business as usual. You’ll be rewarded for your efforts with more control over your own behavior, along with greater productivity.

3. Set Up Your Environment For Success

To increase your productivity, it’s also critical to set up your environment in a way that will support your efforts. If you’re sitting down to work, don’t put your smartphone on the desk right beside you. Instead, leave it in your bag, or better yet, in another room. (If you’re expecting a call, you’ll still be able to hear the ring). When you’re working on your computer, close any unnecessary browser windows, along with your email.

Remove social media apps from your phone. Or, if you really want to up the ante, deactivate your Facebook account (you can always come back to it later). While these might sound like extreme measures, every single person I’ve spoken to who has tried this out has said that it helped them to see just how much time they were wasting, mindlessly liking photos on instagram or decorating their future dream home on pinterest. And, if you take a hiatus from social media, you just might feel happier — research has suggested that young people who engage on more social media platforms have an increased risk for depression and anxiety.

When you go to bed, turn off your phone or, at the very least, don’t keep it on your nightstand. Getting a good night’s sleep is linked to lower stress and higher productivity. But, if you’re spending your late nights on social media or responding to every text that arrives, you won’t be able to recharge adequately. And, that lack of sleep will carry over into your work day.

Finally, to strengthen your ability to stay focused on one thing at a time, you might want to develop your own mindfulness practice. Mindfulness is defined by the Greater Good Center at the University of Berkeley as “maintaining a moment-by-moment awareness of our thoughts, feelings, bodily sensations, and surrounding environment.” As a result, mindfulness helps you to better stay in the present, while also being able to respond to situations intentionally, as opposed to reactively.

Mindfulness has been linked to better concentration, decreased stress, increased creativity, improved memory, and a host of other positive outcomes that will help you to be more productive. Furthermore, if you develop your ability to be more mindful, it’ll help you to reduce the number of times that you grab for your smartphone out of habit.

For example, the next time you feel compelled to reach for your phone when you’re in an elevator, waiting in line at the grocery store, or sitting at your desk trying to work, check in with yourself. Think about why you’re reaching for it. Is it to quell anxiety? Is it because it’s something you habitually do? Is it because you’re expecting a text? Once you’re more aware of your behaviors and why you’re doing them, you’ll increase your ability to make informed choices in the moment.

To get started with mindfulness, a simple practice is to observe your breathing. As you notice thoughts coming up, gently notice them, let them go, and resume focusing on your breathing. Repeat this process throughout your practice, and you’ll strengthen your ability to focus. (For information on how to create a more in-depth mindfulness practice, click here).

Changing your behaviors related to technology aren’t necessarily easy. But, with commitment, you can gain control. You’ll be rewarded with more productivity, and greater freedom over your choices.

This article was originally published in The Mission 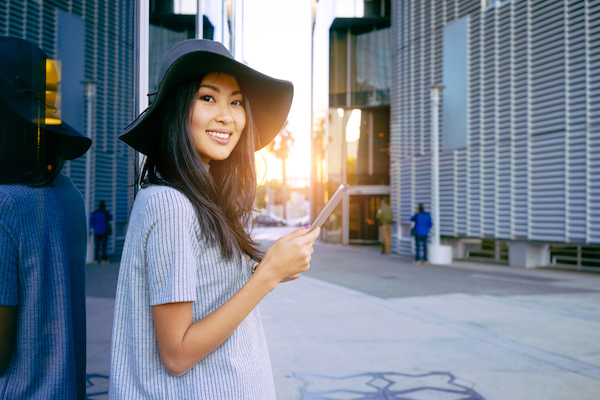 What to do if your boss is a Micromanager