Your Daily Commute Could Be Killing Your Mojo at Work. Here’s How to Cope.

Have you ever had one of those days when you get struck in traffic and arrive late for a meeting or appointment—even after allotting twice the amount of time it should take you to arrive at your destination?

Me too. I don’t know what it’s like in your city, but in mine, I come across someone complaining about traffic at least every other day.

So let’s face it, commuting is stressful—and it probably adds to your work stress regularly as much as actual project-based stress. According to a Road Wage Survey, 48% of individuals reported that commuting significantly affects their job satisfaction, 32% indicated that they took the commute into consideration when they took their current job, and 11% noted that it has a negative effect on their ability to maintain work-life balance.

As you might imagine, research has shown that when you’re in the midst of traffic, you may experience negative outcomes in your personal life, including the onset of aggression, negative mood,  and increased blood pressure and heart rate. However, even after you’ve left your car and gone into the office (or wherever you’re going) the effects may spill over. One study found that individuals who reported having a stressful commute and were given a difficult puzzle task to complete shortly after, showed worse performance on a follow-up task of moderate difficulty when compared to a group of individuals who had performed an easy task after their commute. In addition, those who reported being in a negative mood performed particularly poorly. This suggests that (1) the mental state you are in following your commute matters and (2) your level of effectiveness can be dependent on the type of tasks in which you engage once when you get out of traffic.

And, lest you think that you are immune to commute-related stress because yours doesn’t involve a car, a study of morning rush hour train commuters suggests this is not the case. In that study, participants who perceived their commutes as unpredictable experienced greater stress and higher levels of cortisol (the stress hormone) during the ride. An additional study found that the longer the train commute, the more likely the individual was to be stressed at the end.

Given the potential spillover effects (not to mention the fact that a stressful commute just doesn’t feel good while you’re going through it), it would seem prudent to put some thought into how to lessen the potential harm that your commute can cause. Here are some suggestions.

1. Be so cautious about timing that it seems impractical.

While it’s obvious that timing your trip is important, I am including it because I have worked with a number of clients who can be pretty unrealistic about the nature of traffic, and choose not to allot any extra time in case something goes awry with their travel plans. For everyone, unpredictability is stressful.

That’s why I recommend you give yourself more extra time than you even think you’ll need. Try being unrealistic about traffic in a different way, assuming that it will always be extreme. That way, if you do end up getting delayed for some unforeseen reason, you will experience less anxiety than you would have if you hadn’t planned accordingly. And, if nothing unexpected happens and you get where you’re going with time to spare, you’ll have a chance to decompress, get centered, chat with colleagues, and put yourself in a more positive state of mind.

2. Plan the course of your day with your commute in mind.

While you may not have complete control with regards to your schedule, the research cited earlier in this article suggests that if you’re feeling stressed from your commute, diving headlong into complex work might not result in your best work. (Given that the task the participants in the study were asked to do was a relatively short one, it’s difficult to know how long this effect persists; however, it does give reason for pause). So, whenever possible, give yourself a chance to transition from commute mode to work mode and settle in before embarking on tasks that require a lot of mental energy.

3. Listen to your self-talk and adjust it accordingly.

If you were to take a random sample of drivers or train passengers on their way to work, you would likely find huge differences with respect to how stressed people felt. As renowned psychiatrist Viktor Frankl wrote, “Between stimulus and response there is a space. In that space is our power to choose our response. In our response lies our growth and our freedom.” In other words, even though you might be in the midst of congestion, the commute doesn’t have to stress you out. You could choose to  fill your mind with stress-inducing thoughts such as, “This traffic sucks,” “This is taking too long,” and “Is that idiot even paying attention?” Or you could choose thoughts that provide you with some relief like “I’ve still got plenty of time,” (see suggestion #1) “Stressing out isn’t going to make traffic move any faster,” or “I’ll get there eventually.” My guess is you’ll feel arrive in a significantly better mood if you opt for the second set of thoughts.

4. Realize the legitimacy of commute-related stress, and manage your mood.

It might feel easy or perhaps even comforting to dismiss the stress your commute brings up as “no big deal,” or “just the way it is.” But it can actually be more comforting to recognize the extremeness of the anxiety that being stuck in traffic can bring up, especially when you’re unable to do anything and aware of your impending late arrival. Being realistic softens the edge, and will help you plan accordingly.

Make it so you can engage in activities that will make your commute more pleasant for you. Listen to music you enjoy; it’s been found to be helpful in reducing anxiety  for people awaiting surgery, so it might just work for you in your car or train. Talk to a friend (as long as you’re not getting yourself worked up by venting about stressful things). Mindfully drive in silence while focusing on deep breathing, looking for beauty in your surroundings, or thinking about things for which you are grateful. I’ve worked with many clients who look forward to their commute as an opportunity to have some quiet time, chat with loved ones, or listen to audio books. Point is, you can empower yourself by engaging in behaviors that will make your travel time more pleasant.

While spending time traveling to and from work may not be your favorite time of the day, it doesn’t have to be the seemingly inevitable drain that it is for so many. So, pick out a few of these tips, try them out, and see if you are able to get your day off to a much more positive start.

Want some other research-based tips that will help you to be more effective in your work? Click here. 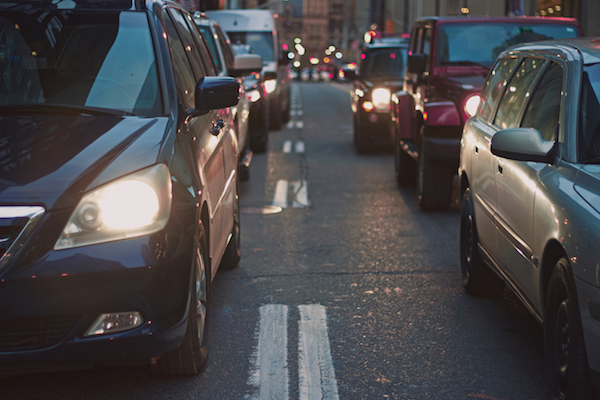 5 simple ways to incorporate mindfulness into your work day (and why it will help!)