Getting ready for the big meeting - part II: Dealing with Nerves

In the first article in this series on getting ready for the big meeting, I walked you through some steps designed to help you get your content together by reflecting on characteristics of your audience. In this second installment of this two-part series, we’ll focus on how to get yourself together for it, by dealing with nerves.

When there’s a lot riding on a meeting, it’s understandable that you might feel some nervousness leading up to it. However, I promise that if you apply these six tips, you’ll be well on your way to developing a mindset that will help you to succeed.

Let’s start with the obvious. There’s nothing like knowing you’re unprepared for giving you a (much-needed and appropriate) source of dread and nervousness about the big meeting. Don’t put yourself in that situation. As tennis legend Arthur Ashe said, “One important key to success is self-confidence. An important key to self-confidence is preparation.” In other words, prepare, prepare, prepare.

Many of my clients find that visualization is a helpful tool for getting in the right mental space before a meeting. To try it out, find a quiet space, close your eyes, and picture in your mind’s eye, how you would like the meeting to go. Try to make the visualization as vivid as possible. What are you wearing? What is your posture like? What are you saying? How are people responding to you? What does the room look like? How are you feeling at the end of the meeting?

To increase the effects of using this strategy, I recommend visualizing at least once a day for several days (or more) leading up to your big meeting. You can even visualize obstacles coming up – and see yourself handling them with skill. And, if you’re someone who has a hard time visualizing, you might experiment with writing out a first-person account of the meeting, using all the same principles I outlined for the visualization. Just as athletes enhance their performance by using the power of their imaginations, so to can you.

Are you your own worst enemy when it comes to maintaining the sort of positive, self-assured outlook that would best serve you in a big meeting? Do you spend most of your time focusing on the worst possible outcome, causing you to become wracked with fear?

To deal with this, I recommend making sure that don’t caught up thinking of the worst case scenario, at the expense of other potential (and much more probable) outcomes. Try to evaluate your thoughts with the objectivity of a scientist. For example, if you think, “I’m definitely going to blow this” consider the evidence. Is there a 100% chance that you are going to? (Unlikely) Do you have any instances in your life in which you didn’t blow a presentation? Have you ever influenced someone – anyone – effectively? When we psych ourselves out, it’s very often due to all-or-nothing thinking, but these black and white sorts of explanations are rarely true. So, take a step back, and try to look at the situation more objectively.

Want to be a more effective influencer? Channel your inner superhero. Psychologist Amy Cuddy’s research has shown that putting yourself in an expansive physical position (i.e. “Power Posing”) for two minutes actually changes your physiology. In fact, her studies have shown that after holding this posture for a relatively brief amount of time, your testosterone (dominance) levels increase and your cortisol (stress hormone) levels decrease.

Moreover, research subjects who have been power posing (unbeknownst to the audience) before making a presentation are rated as having greater presence than those who have been in a more diminutive pose. They also exhibit a higher risk tolerance. For more information, I highly encourage you to check out her Ted talk entitled “Your Body Language Shapes Who You Are. It’s been viewed over 31 million times (and counting). Why? Because it works.

(Note: since this post was originally published, the effectiveness of power posing has been called into question. Click here for more information about the debate).

5. Focus on the commonalities between you and your audience

When the audience of the big meeting is composed of people who you consider to be powerful, you might find the intimidation factor ratchets up a notch. To avoid making yourself unduly nervous, I recommend focusing on the common humanity you share with them. We all have insecurities, fears, and challenges. We all have hopes and dreams. We all have friends or family members we care about. We all have needs for acceptance and connection. We all change out of our power suits at some point during the day, and put on shorts, sweats, or pajamas instead. If you can remember that the people you are presenting to are real, full-fledged human beings, it can help you to see them as less threatening, and hopefully, allay some of your fears.

6. Remember it doesn’t have to be perfect

Finally, do you believe that you have to be perfect to be effective in your meeting? Not only does this belief likely heighten your anxiety, the fact is, it’s not necessarily true. A psychological phenomenon called “the pratfall effect” has shown that in cases in which someone is perceived by the audience to be competent, committing a major pratfall actually causes people to rate him as more likable. (In the case of the study, an actor spilled a cup of liquid and apologized profusely as he was chastised by another person). Given that likability has been shown to enhance one’s ability to influence, showing a bit of vulnerability may actually help your cause.

(Important caveat: It’s important to note that this effect only works if you’re seen as competent. But, given that you prepared as I outlined in the first tip, you’re obviously competent, right)?

In closing, remember these words of Dale Carnegie, “A book may give you excellent suggestions on how best to conduct yourself in the water, but sooner or later you must get wet, perhaps even strangle and be “half scared to death.” There are a great many “wet less” bathing suits worn at the seashore, but no one ever learns to swim in them. To plunge is the only way.”

So, dive in, gain the experience, learn from it, develop your skills, and dive in again. Before you know it, you’ll be a pro at handling big meetings. 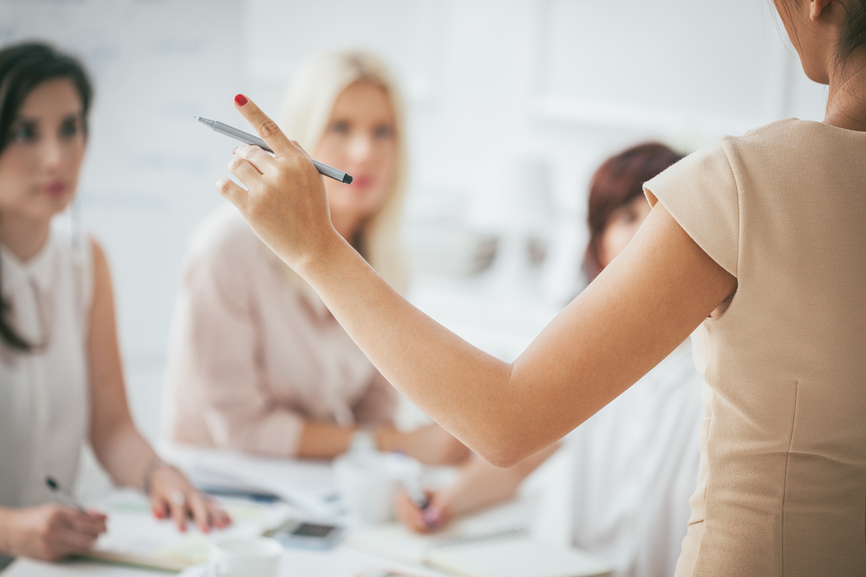 The Ultimate How-To Guide For Speaking Up at Work

How to Boost Your Employees’ Emotional Wellness – and Why It Matters